Exactly a decade ago I got my first job in the agri-food sector as a farm conservation advisor. A typical day saw me surveying farm habitats and helping land managers integrate biodiversity into their day-to-day business practices – nearly always financed by EU agri-environment schemes (AESs) or charitable trusts.  Public sector and NGO expenditure on UK biodiversity peaked in 2008-9 and now stands at approximately £750 million per year (see Figure 1 below).

Figure 1: Investment in biodiversity in the UK by public sector and NGOs(1) 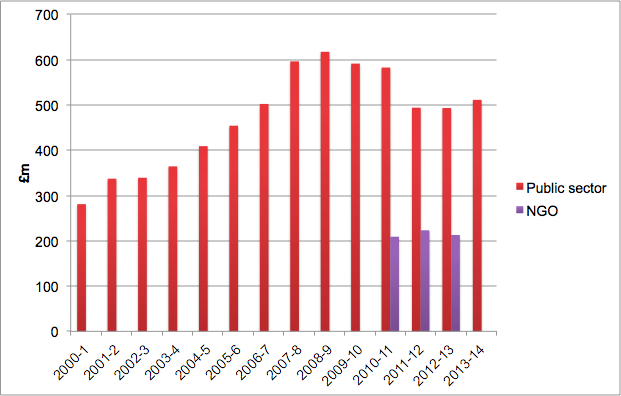 Given the prevailing national and international political climate, it’s unlikely that public funding of UK biodiversity will reach those levels again any time soon, however the core challenges remain. Despite billions of pounds of public investment in a set of very complex policy tools, the declines in many UK biodiversity indicators have not been halted, let alone reversed (see Figure 2 below). 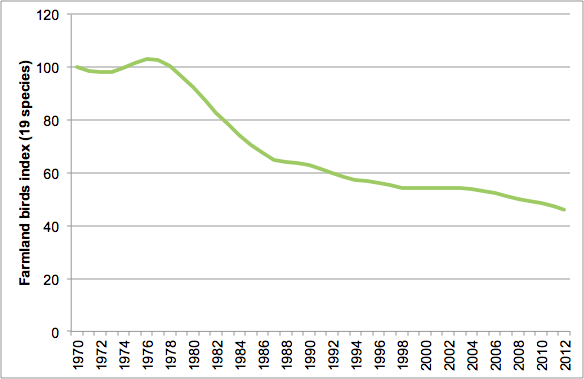 Conservation researchers have been trying to establish if AESs are working as intended. Unfortunately the evidence so far has been mixed and inconclusive.

The rise of ‘market-based mechanisms’

Alongside the recent decline in public funding, corporate interest in biodiversity has steadily increased – driven by a growing understanding that business is ultimately dependent on a suite of related ecosystem services (e.g. pollination), as well as a desire to protect corporate reputations from being associated to habitat destruction. To help incentivise the protection and restoration of biodiversity, different market-based mechanisms have been designed and implemented. The majority have focused on creating new markets or transactions by which land managers can get economic benefit from changing practices, such as:

Unfortunately there is no reliable data on the scale of private sector investment in UK biodiversity via these and other mechanisms (including self-financed work by farmers, food supply chain producer groups, etc.). And while it is probably on the increase, we estimate that investment is an order of magnitude lower than current expenditure by the public sector and NGOs(2). It would also be fair to say that none of the approaches above have proved themselves so far. This could be down to the relative immaturity of the tools – and there is undoubtedly room for improvement – we think particularly through more entrepreneurial PES schemes (such as those being piloted by 3Keel and the Woodland Trust near Bolton).

Given this context and experiences to date we think it’s a good time to stand back and have a cold hard view at how the private sector – or market mechanisms – can most effectively incentivise the desired biodiversity and ecosystem service outcomes.

Biodiversity management in the UK – a landscape of competing incentives

The complexity of existing farmer incentives and the landscape-scale of ecosystem service processes has major implications for the effectiveness of different market mechanisms. A glimpse into some of these implications can be seen in a peer reviewed analysis of public and private sector conservation schemes in the UK. The research found that, while there was greater habitat diversity on farms with private sector certification compared to publicly-funded ‘entry level’ agri environment schemes, it was difficult to say whether this was down to the adoption of the private sector standard or the farm’s participation in ‘higher level’ agri environment schemes. My instinct is that the amount of monitoring and evaluation needed to make confident statements about the relative contribution of multiple private, public and third sector incentives will be uneconomic and a potentially a worrying distraction. Put another way, it has been possible to compete and compare on the basis of activity (e.g. areas of field margins created) but I suggest impractical/impossible to do so on biodiversity outcomes (i.e. improvements in farmland bird numbers in a particular landscape or region). As stakeholders increasingly expect the impact of sustainability initiatives to be judged on outcomes this aspect of biodiversity will become ever more obvious. Competing on farm-level conservation actions will be less and less credible.

On a more practical note, if the private sector’s strategy is to set more standards that require similar or competing conservation management measures to those being incentivised by billions of pounds of NGO and public funding, this instinctively doesn’t feel like a route to delivering a step-change in biodiversity improvements. What will the marginal impact of these additional incentives be?

Given the above challenges we need to explore novel market-based mechanisms for incentivising improvements in biodiversity – and sustainable natural resource management more broadly. 3Keel is exploring what this means in practical terms, however I believe that new mechanisms will have the following core characteristics. They will:

Overall, it’s time for some smarter, simpler thinking to get the land use outcomes that society wants and needs. Complex interventions in complex systems can be costly and deliver unintended outcomes.

2 I estimate it is probably of the order of £50m per annum. Based on a comparison of the area of farmland being managed for biodiversity under ‘voluntary’ measures compared to that under agri-environment schemes

The complexity of existing farmer incentives and the landscape-scale of ecosystem service processes has major implications for the effectiveness of different market mechanisms.

3Keeler Josh Deru has been speaking to @GuardianJobs about the evolving role of sustainability consultants in a changing world. 🌍

He describes how we're helping businesses "navigate what is a constantly changing landscape”. 🏢

Our FLAG webinar is coming up this week! 🌳

Is your business seeking support on understanding the latest FLAG guidance from the Science Based Targets Initiative and the draft Land Sector and Removal Guidance? 🚜

Is your business still grappling with the FLAG carbon accounting guidance? 🌳

This site uses cookies. By continuing to browse the site, you are agreeing to our use of cookies.

We may request cookies to be set on your device. We use cookies to let us know when you visit our websites, how you interact with us, to enrich your user experience, and to customize your relationship with our website.

Click on the different category headings to find out more. You can also change some of your preferences. Note that blocking some types of cookies may impact your experience on our websites and the services we are able to offer.

These cookies are strictly necessary to provide you with services available through our website and to use some of its features.

Because these cookies are strictly necessary to deliver the website, refusing them will have impact how our site functions. You always can block or delete cookies by changing your browser settings and force blocking all cookies on this website. But this will always prompt you to accept/refuse cookies when revisiting our site.

We fully respect if you want to refuse cookies but to avoid asking you again and again kindly allow us to store a cookie for that. You are free to opt out any time or opt in for other cookies to get a better experience. If you refuse cookies we will remove all set cookies in our domain.

We provide you with a list of stored cookies on your computer in our domain so you can check what we stored. Due to security reasons we are not able to show or modify cookies from other domains. You can check these in your browser security settings.

These cookies collect information that is used either in aggregate form to help us understand how our website is being used or how effective our marketing campaigns are, or to help us customize our website and application for you in order to enhance your experience.

If you do not want that we track your visit to our site you can disable tracking in your browser here:

We also use different external services like Google Webfonts, Google Maps, and external Video providers. Since these providers may collect personal data like your IP address we allow you to block them here. Please be aware that this might heavily reduce the functionality and appearance of our site. Changes will take effect once you reload the page.

The following cookies are also needed - You can choose if you want to allow them: